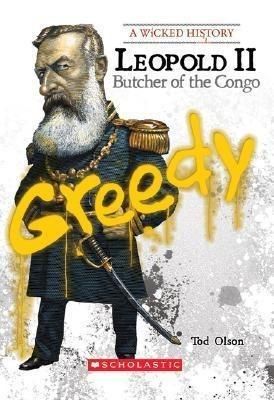 Beschreibung
Beschreibung
Recounts the life of Leopold II of Belgium, including his childhood and rise to the Belgian... mehr
Menü schliessen
Produktinformationen "Leopold II: Butcher of the Congo"
Buch in Englisch.


Recounts the life of Leopold II of Belgium, including his childhood and rise to the Belgian throne, his bloody conquest of the Congo, and his death.

Tells the story of Leopold II, King of the Belgians, who claimed he was helping the people in a colony of Africa along the Congo River, but was really found to be promoting slavery and other ills.

King Leopold II of Belgium was responsible for the deaths and mutilation of 10 million Congolese Africans during the late 1800’s. The spoils of modern day Belgium owes much to the people of the Congo River Basin.

Some of the greatest political and military leaders of history were, let's face it, very wicked. To expand their power or accomplish their goals, they killed innocent civilians and caused needless pain and destruction. This series focuses on these leaders who are now known and remembered for their violence and cruelty. The text seems written for middle-grade readers in that it's easy to read with fairly simple vocabulary and larger font. The content, however, is suitable for older readers as well because the books discuss military strategy, acts of cruelty, political facets, and details of battles. A story-like format is taken, which starts with the leader's birth and describes the person's childhood atmosphere and influences that led to their violent life. Important battles and other events are included, up through the leader's death. Fast-paced and absorbing, the books don½t include all the details of each life, but give a fairly thorough look at each personality, main life events, and the impact on the world.

Each book includes a scattering of black and white illustrations (photos for the more recent leaders) of each figure and the events in their life. Like the text of the book, the pictures are truthful, but as such, somewhat violent (a few dead bodies, battles, etc.) so you may want to look through them before offering them to younger or sensitive readers. Timelines, maps, and a few other features are included in the books, which help you put each leader's story into perspective. The series is being revised to include colorful photographs and graphics. Some also include project ideas.

For a few of the leaders, the book raises questions about whether or not they were truly wicked, or if history has just painted them that way after they were defeated a pretty interesting question. If you're looking for a way to introduce a specific leader or war to your students, or if you're interested in trying to understand these powerful but wicked leaders, these books provide an entertaining and instructive option. Each book is small format (5" x 7"), about 140 pags.