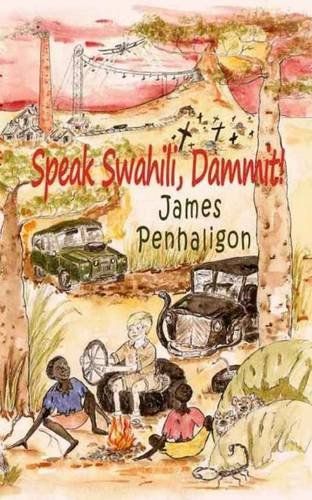 Beschreibung
Beschreibung
This popular and well-reviewed book has now been revised with the assistance of several... mehr
Menü schliessen
Produktinformationen "Speak Swahili Dammit"
Buch in Englisch.


This popular and well-reviewed book has now been revised with the assistance of several enthusiastic readers, former and current expatriates and Kenyan and Tanzanian friends.The captivating story recounts the humour and tragedy of the author's life as a young boy growing up in what was then colonial Tanganyika and Kenya, and the newly independent countries which emerged. It is a must-read for anyone interested in Africa before and after the Winds of Change swept across the continent to alter the lives of so many lucky enough to experience those times. Like many who were born and lived in Africa, the author's life was not the easy one people think colonial expatriates enjoyed, and he relates so vividly his own tragic experiences with hardship, danger and death. Many perils abounded from wild animals, venomous snakes and deadly tropical illnesses. Notwithstanding the ever-present black shadow of death and danger, was the natural instinct of kids to have fun, and the escapades and pleasure the author and his contemporaries created for themselves is related by Penhaligon with rib-aching humour.

Portrait
James Penhaligon is a medical doctor and consultant psychiatrist in the United Kingdom. Born to Cornish parents, and raised deep in the bush in Tanganyika, later to emerge as Tanzania, he remains a fluent Swahili speaker, and has never been able to escape his early influences, or the gaze it gave him on life. Despite having left Africa, and carving himself a successful career, James has always had a fascinating East African story waiting to be told, and now he has written it. James lives with his wife and a rebellious Boxer dog in a house overlooking the sea in Falmouth, Cornwall. They often travel to East Africa.