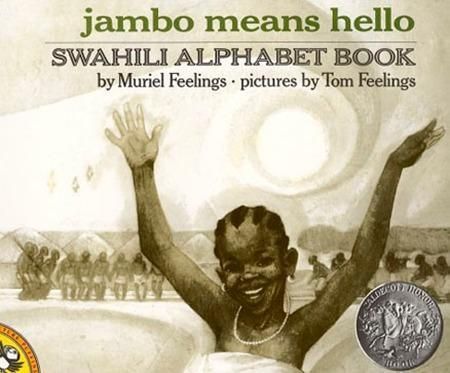 
A companion to the Caldecott Honor Book Moja Means One: Swahili Counting Book.

Portrait
Muriel Feelings was born in Philadelphia, Pennsylvania, and attended California State College. She lived in Guyana, South America, and in East Africa, where she taught for two years. Upon her return to the United States she taught high-school art in Brooklyn, New York. Her award-winning books Moja Means One and Jambo Means Hello were both illustrated by Tom Feelings. Ms. Feelings passed away in September 2011.

Tom Feelings, well-known illustrator and artist, was born in Brooklyn, New York, and attended the School of Visual Arts. In 1971 Mr. Feelings became the first African-American artist to win a Caldecott Honor with his illustrations for Moja Means One. Among the other award-winning books he has illustrated are To Be a Slave, a Newbery Honor Book by Julius Lester, and the Coretta Scott King-award winner Soul Looks Back in Wonder, a celebration of African-American creativity for which such distinguished writers as Maya Angelou, Margaret Walker, and Walter Dean Myers wrote poems. Mr. Feelings passed away in August 2003.