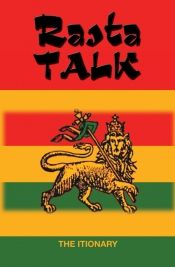 
The Itionry. A fun guide to rastafarian dialect.

Rasta Talk, the first book of its kind, takes a look at the unique and colourful jargon of Rastafarians.

ABOUT THE AUTHOR
The author, a devout Rastafarian, is also a popular Reggae musician known as Jesse Jendah. He divides his time between Jamaica and theUnited States, and in addition to touring the world and recording music, the ever enterprising Jendah has also produced a documentary called Runaway Slave. This is his first publication.